Yesterday was very productive.  I got in  40 minute fast walk (3.6 mph) on the treadmill; one of these days I'll actually begin jogging.  Probably sooner rather than later.  Laundry was done.  Work was done on the big tank.  The plants I ordered seem to have survived and are growing.  Pics coming soon.  Temps in the area are supposed to hit the mid-fifties, with rain and wind this afternoon.

I still haven't heard from the insurance adjuster.  When I called the repair shop, I was told they were booked up until March just to give estimates.  Son of a bitch.

There's a special package arriving tomorrow.  Good thing it's my day off from work.  Pics or video coming soon.

And, I went to see Death on the Nile last evening.  I liked it... kind of.  After all the shit about Armie Hammer's personal life came out, you know the bloody biting, the cannibalism, the violence... well, every time he was on screen I cringed a little.  As for the movie.  I'd read the novel a long, long time ago and while all the details didn't float to the top of my head, I remembered who the killer was so it really wasn't so much of a 'who done it' for me.  Instead, I thought about Christie.  Mysteries have changed since the book was written, back in 1937.  When I read it, about 40 or so years ago, I was wowed.  Watching it last night I thought, wow, that's a bit contrived.  So much of the plot relied on happenstance: this person just happened to see this, and this person just happened to see that, and this person just happened to put things together before Perot.  Also, there was a black and white prologue and a finale that I'm sure has Christie spinning in grave.  No spoilers. 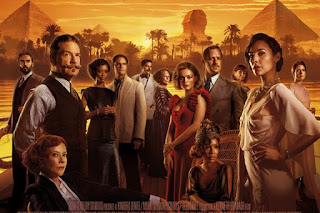 I saw there was bad news this morning from the Ukraine.  There were claims, and pics, about a supposed attack on one the separatist states which wants to join Russia.  This is one of those false flags Biden talked about, Putin contriving to try and legitimize his invasion.  Oh, and than there's that bit about how Putin lied about the troops, they weren't withdrawing, in fact more troops were being added.  I don't think Putin understands how terribly blood his invasion is going to be.  Neither he, nor Xi understand the days of emperors are gone.  Oh, and a bit of a warning, if you have stocks, hold on to your hats, because the moment Russia invades, the stock market is going to go into a big dive.