Well, we're off to a really windy Friday.  High gusts have tugged the top off of my garbage can and sent it sailing.  One of the resin chairs I never sit on was upended and sent dancing.  Later this afternoon, after things die down, I will put everything back where it belongs.

The insurance adjuster called yesterday. My damage is covered by my comprehensive insurance, so I'll have a $250 tab to pay.  The estimate is scheduled for March 22... yeah, they are that far behind.  One of my fellow associates sold cars at one point in his career, so I showed him the picture I had taken.  He pointed out that my bumper cover was cracked.  "That'll be a expensive fix," he told me, "there are a lot of sensors in your bumper."  As long everything is covered, I don't care.  Part of my coverage includes a free car rental from Enterprise while my car is in the shop.  They called yesterday and wanted to know when I needed the car, so I told them it won't be until probably sometime in March.

I watched the last episodes of The Book of Boba Fett last evening.  I suspect Disney was hoping the series would be as popular as The Mandalorian it wasn't.  Boba didn't have the cute, little Grogu.  Boba has a rancor... and he rides that sucker... and it did eat people. 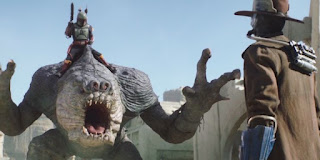 And thanks to a judge, the Orange Anus, Ivanka Danka, and the Dumb One need to give depositions in a Civil Lawsuit.  Perhaps if they hadn't lied so much been so blatantly brash, this case would never have had legs.  However, it seems al that that family knows how to do is lie, lie, lie, make brash statements.   As a result, their financial empire is in serious jeopardy, perhaps if the foundation hadn't been laid upon the sands of deceit.  And because this is a Civil Case, rather than the Federal Case the New York Attorney General is working on (at present, I believe, 19 separate lawsuits have been filed against this crime family) taking the 5th is pretty much treated as an admission of guilt and actually can be used against them in the Federal Trial.  Holy Mother of Ouch Shit!