Well, we have freezing rain outside.  Ice melt has been strewn across the veranda, or the patio, or what ever you want to call the area of pavers outside the back door.  We don't want the dogs slipping and sliding.  Dogs over 8 years old should not have to deal with icy walkways.

I spent a long time yesterday with  customers who had wanted to put vinyl plank in their basement. Their floor is not level enough, in fact the installer advised them to bring in a contractor to level it for them.  This is a job that should not have been sold... at all.  Who ever sold it, ignored all the warnings on the quote and now we look bad.

Today the furniture in the computer room / exercise room is getting moved. There needs to be a better allocation of space.  Right now the treadmill is at the far end of the room, next to the window, and that's a little close.  While it would probably never happen, the possibility exists for me to trip, and perhaps fall to the right, and maybe do a lot of damage to both myself and the window.  The last thing I want to do at  my age is to go crashing through.  So, the bike is going to be moved a 1.5 feet to the left, and the treadmill is going to be slipped in beside it. 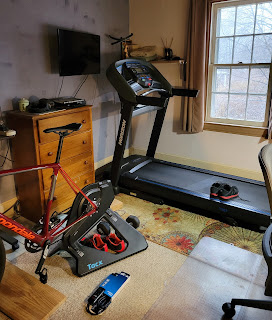 And the Russian army has entered Kiev.  Putin believes the government will capitulate soon.  That may well happen.  Of course, that doesn't mean there isn't going to be an insurgency.  There will be resistance cells constantly picking away.  And it will spread.  This will piss off the Russian citizens who will bear the financial brunt of Putin's bonehead move.
Finally, let me talk about Lauren Witzke.  She gives bottled blondes a bad name.  Lauren is one of those Cracker Jack Crazies who crashed through the window of reality.  She campaigned to be a senator from Delaware in 2020... and lost because...  She has gone on record praising Putin and his Nationalist Christian Party.  That's right, she called Putin's fan base Nationalist Christians.  Evidently no one has ever told her about the Russian Orthodox Church.  Let me be honest here, the first words that flashed through my head when I saw that were Holy Fuck.