The fudge is gone!  It's a good thing I took several slices to work, otherwise I'd be 10 pounds heavier.  Tasty, rich, and delicious, the one good habit I have in regard to the bad habit of eating candy is that I get my fill fast.  Then I'm done, and the desire to chow down fades.  Right now, I'd say I'm good on skipping fudge for the next five or six years, or at least until an inkling inspires to be to order another box.

Temps here are supposed to climb into the upper 50's (F) today.  I'm only scheduled to work for 4 hours.  Tomorrow and Wednesday, they're supposed to top off in the lower 60's (F), but then they drop.  Spring can be such a tease at times.

So, I printed off a map of Mackinac Island in order to place 'the body.'  I frequently use maps.  Knowing the geographical location helps.  I spend a lot of time on the computer, too, looking at various sights in the area where 'the body' will be found.  For The Body in Repose, I learned quite a lot about the French Quarter from photographs various people had taken over the years.  One of the things that was a pleasant surprise was discover that there are rooftop bars in the French Quarter; not all the bar crawling takes place on street level.  Any way, here's the map for Mackinac.  Any ideas as to where the body is going to be found? 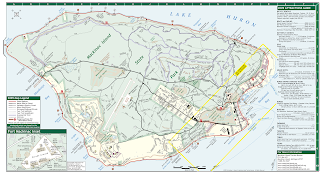 So, there might be a summit between Biden and Putin... maybe.  If it happens, I doubt very much if Putey baby is going to come riding in shirtless, and on the back of a horse.  And, if it happens, will anything be accomplished?  I doubt it.  As I've said before, Putin has a boner for the Ukraine.  I find it interesting how one of his demands has to do with NATO, claiming he sees it as a threat.  The Orange Anus didn't like NATO either, his claim was that the member countries weren't paying their fair share.  Keep in mind, the Orange Anus also desperately wanted to build a hotel in Moscow.  Well, that hotel ain't gonna happen.  Because Orangey's coup failed, his blow bro Putin now has to deal with a president who sees him for what he really is, a little man with a big ego, a little man who's going to lose even if he does invade.  Till all is said and done, he's going to be as big a loser as the Orange Anus.