Monday has arrived.  Work is scheduled... maybe.  Plants I ordered for the tanks are supposed to arrive today... that's if the tracking is correct.  They're coming from Aquarium Co-op, a company I've used several times before, however this is the first time I've ordered plants during February.  There is a heat pack included, but I have no idea how long that will keep the temps in the shipping package warm enough to keep the cold from killing everything.  The last thing I want is for them to sit on the porch for 3 - 4 hours when the outside temp is 40 (F).  Believe me, I don't mind take a personal day to save the verge.

And even though The Body in Repose has just begun to be proofread, the first sentences for The Body Under Ice have been put to paper.  Blame it on the part-time hours.  I mean, it's not like I can shut down my brain.  Even while I'm sleeping - sometimes, I will roll over and wake-up, or at least it seems like I wake up, and realize I need to either add something or change something.  Lucky for me, I don't forget things when I fall back to sleep.  Of course, maybe the whole thing is a dream and I'm just remembering it.

And, since there are no cars permitted on Mackinac Island, my protagonists, Eli and Max, will have to get around using either skis or snowmobiles.  Oh, and there is the horse drawn taxi that will take them from the airport to the B&B where they are staying. 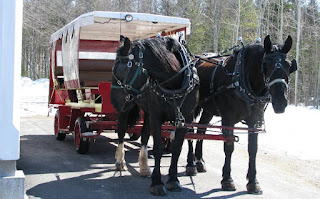 I received a text yesterday from a friend, Jack, telling me that a mutual acquaintance had died.  I think he was expecting me to be upset.  Unfortunately, all I could muster was a 'that's a shame' reply, since I've not talked to this person in over 3 decades  What makes this even more odd is that I have not spoken to Jack in almost 8 years.  I've called and left him messages, he never responds.  Time is not always friendly to friendships.  Perhaps he just needed to be the bearing of bad tidings.

And here's a bit of humorous bad tidings.  After a closed door meeting, the RNC of Pennsylvania has chosen to not endorse a Republican candidate for Senator.  Indications are they're concerned about endorsing someone Loser Trump doesn't like.  Of course, the one person the Orange Anus had endorsed, Sean Parnell, had to pull out of the race because he was an abusive husband and parent.  Anyway, this is really bad tidings for the large field of candidates who will soon be going for each other's throats.  It is, however, good tidings for the state.