Well, it's Sunday... or perhaps I should say Super Bowl Sunday, and we're getting snow here in Central PA.  Not much, an inch is possible.  We've already woken up to find a dusting layered thinly on the cars and lawn.

My shift is short today, from 3 -7 PM, and since today is Super Bowl Sunday, the store will be fairly empty, except for those who despise football.  Let's be honest, if you like the game, even if your team isn't playing, you'll probably be watching since this is a great excuse to parteeeeee!  Me?  I'll be working, then feeding the dogs, and then... maybe working on the next book.  The Piper Mirage carrying Eli and Max has just landed at Mackinac Island Airport and they're about to meet Tag Porterman*.  This is what the cabin of a Piper Mirage looks like.  Comfy, eh? 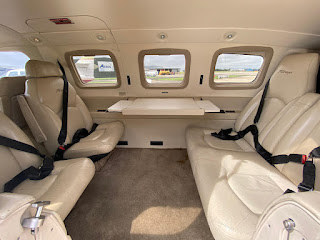 And, speaking of Super Bowl Sunday, I saw where Rand Paul suggested that anti-vax truckers should blockade that esteemed game.  Okay, can we talk about being dumber than a box of rocks?  While getting some really great publicity, the anti-vax movement is not nearly as large as some might think.  This morning, when the police finally began arresting protestors they found 2 pick-up trucks and maybe a dozen protestors.  So, I think they should try and blockade the Super Bowl.  Yeah, more power to them!  Because a majority of Americans would not jump on board their bandwagon for ruining the Super Bowl.  Nope. They'd say "get the hell out of my face!"  Personally, I think they should lift all restrictions.  We're heading into 1 million Covid deaths in this country, and a majority of the last 400,000, or so, have been anti-vax Conservatives.  The antibodies you get from having it once only last for so long, which means they'll be getting it again, and again, and again.  Eventually, they'll all die off.

* name is subject to change