The temps are supposed to rise into the mid-50's today (F).  Rain is in the forecast for tomorrow.  With the temps warming up, I need to start thinking of my flower planting this year.  Two years ago I did bulbs and bunches of zinnias across the front.  Last year, some of the bulbs came up (no tulips) and very few of the zinnias, so this year I'm thinking of putting in a row of dahlias.  Now, won't that be nice?

My dental visit turned out to be mundane.  I had a filling I felt was beginning to crumble, and it was just my curious tongue imagining the worst.  The filling's fine.   My next appointment is scheduled in September.

However, while driving from my dentist to my neighborhood Giant, a dump truck turned on to East Penn Drive and a stone (rock) fell off.  The truck was approaching me at probably 20 mph, and I was heading towards the truck at 45 mph.  This is the stone (rock).  It's about 4 inches wide, 1.5 inches high, and 1.5 inches deep. 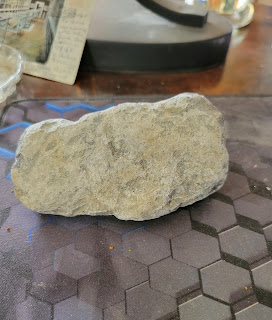 And that little sucker took out my left front parking light... completely.  I actually found the stone (rock0 sitting inside the car. 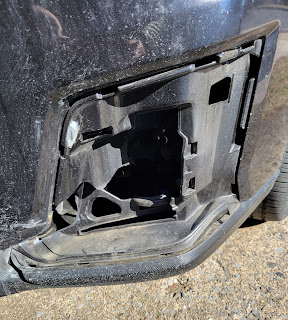 And, I'm waiting for the Insurance Adjustor to call.  I was told by my agent this type of damage is usually covered by comprehensive, but some adjustors will occasionally say this was a collision because I didn't brake.
On the lighter side of thing... I saw a Tweet last evening which said, "Fox News can't seem to stop talking about Hillary, so Trump must really be in trouble."  Maybe someone should tell Fox News they're beating a dead horse... of course, they're always looking for a dead horse to beat.  Hillary had the decency to accept her defeat in 2016.  Now, Fox News, in their desperate attempt to keep the Orange Anus from either going to jail or relocating to Russia is bringing up Hillary Clinton... again.  In fact, she is the 'go to' victim every time Republicans see that roiling tsunami of shit heading their way.