Is Tucker Carlson a Commie Pinko?

Wednesday already.  Outside, the temps are a near balmy 61 (F), however, that will be changing soon.  Cold is on the way.  And snow (just a dusting), and ice (enough to make the roads slick).  Both of those happy things are due to arrive sometime late tomorrow afternoon, about the time I'm going to be heading home from work.

Yesterday was a quiet day here.  A couple loads of laundry were washed and dried.  A short walk / run was done on the treadmill.  I had planned for staying on longer, but I accidently pulled out the emergency shut down plug when I was reaching up to increase the speed and, well, every thing came to a sudden stop.  This is that has happened.

I do need to go to the store today.  My Xbox controller needs batteries.  I've started a 3rd play through of Mass Effect 3, the legendary edition.  Mass Effect was ground breaking when it came out in that it incorporated romance in the action... same sex romance, if you happened to be playing as a female Shepherd.  It wasn't until the 3rd part of the trilogy came out that same sex romance for the male Shepherd made it's appearance.  Now, all RPG's offer romance regardless of gender. 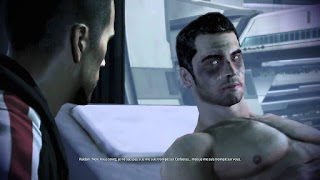 And of course, Bad Boy Vlad gave a fiery speech which left a number of historians scratching their heads.  He seems to have been  collaborating with Trump since a lot of what he said was... well, an ugly version of creative history.  One of the things he brought up was the USSR.  For those of you who are too young to know, the USSR stands for Union of Soviet Socialist Republics.  That's right, before Russia began to fake their democracy, they were Communist.  We called them Commie Pinkos.  So, what we have is Vlad lamenting the tragic collapse of the USSR.  He'd like to go back to the 'good ol' days' of the 1950's, just like Conservatives in this country.  Back then, Republicans knew who the enemy was, today, however, some of them want to side with Putin.  Take Tucker Carlson, who's been spending an exorbitant amount of time praising Vlad and what he's been doing.  Back in the 50's, Conservatives would have called Tucker Carlson a Commie Pinko.  I don't doubt for a second that Tuck's Karma is going to take him down because he has become dangerous.