Not the time for lobbing hand grenades

About those French Fries I cooked in the air fryer?  They were... okay.  The recipe called for 2 russet potatoes, well potatoes come in all sizes, so I there may have been too many fries in the fryer, and you're supposed to give them a shake halfway through cooking, and, well, I was feeding the dogs when the fryer beeped, so they may not have gotten the shaking they deserved.  I have a deep fryer, so maybe I'll just stick with that for the fries.

Winter weather's moving eastward again, not for us here in Central PA.  We're going to get sleety ice instead of snow.  After that, if the two week forecast is even remotely correct, temperatures are going to be rising.  That'll be nice.  Right now, we have rain, which is doing a very good job of melting the ice still covering much of the yard.  Ice is bad for dogs, they don't know how to walk on it.

Even though yesterday was really a busy day, a load or two of laundry, Biggie was still tired last evening.  This is because all around me people were getting deliveries from UPS, and Fed Ex, and both Biggie and Lily love delivery drivers.  Every time a truck pulls up out front, they need to go outside and say hello.  Anyway, he was exhausted and decided to hit the futon early. 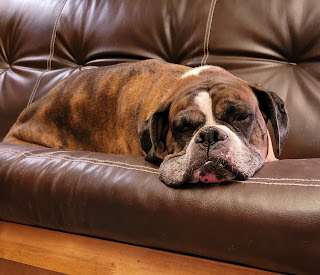 I saw this interesting article in CNN regard the January 6 Committee regarding the really big mistake the Republicans made.  Initially, the Cracker Jack Crazies thought they could create a big enough disruption by adding Jordan and Johnson to delegitimize the process.  Nope.  The committee wanted nothing to do with those liars.  The 2 Republicans on the committee chose not to bow down to Trump and lick is ass and so a majority of the party told them to screw off.  Now they have no one on the committee and Cheney and Kitzinger aren't telling them shit.  Ouch!  And a day doesn't go by when someone who knows what happened on January 6 isn't sitting there talking to them.   And by talking, I mean providing information; they realize the Republican party is the worst type of fair weather friend.
Releasing the dirt now would be damaging, but Americans have a short term memory problem.  Mid-terms aren't until November, and who knows what will happen between now and then.  Be patient.  Bannon's trial is set for late July, perfect timing for the mid-term elections.  People want Trump indicted now... too early to effect the mid-terms.  Indictments for his spawn might start dropping in July or August, or September.  Those are the months in which the hand grenades will have their most damaging effect. Now is not the time for lobbing hand grenades.