On the last day of my weekend, I have so much that needs to be done.  How much gets accomplished?  We will have to wait and see.

I did talk to the  radiology dept. at the VA yesterday, and yes, they were calling to schedule an appointment... for next year, June of 2022.  They do plan in advance.  My next physical is already scheduled, as well as the bloodwork, for next May.

My ride yesterday took me to Barcelona, along the shore.  There were so many people, though the ride is not nearly as bad as Amsterdam, where dodging tourists becomes a sport. The video was definitely shot pre-Covid.  They have bike lanes, which is really good, since the route wends it's way down some high traffic streets.

Temps today are forecasted to hit the upper 80's (F).  That's fine with me.  According to Accuweather, there are more days where the thermometer is going to hit the high 90's (F).  There was an article on Climate Change, NYT, I believe, where the comparison was made between the west coast heat and the east coast rain.  They don't have enough rain, we're getting a bit more than normal.  Same thing happened last summer.

Here's a pic of me in my chili pepper cycling socks. 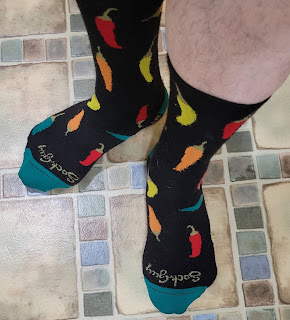 And finally, we're all seeing how Covid cases are rapidly rising among the unvaccinated.  Who Cares?  Is the predictable even noteworthy?  Governor DeWine, (Ohio), is again pleading for the Republican voters of that state to get their asses vaccinated.  He doesn't understand that his embracing The Big Lie is insidiously tied to the Anti-Vax movement.  There is a raging fire of infection in his state, and he's coming up with contests.  At this point, nothing is going to help.  Even if he began telling the truth, not of his constituents are going to be believe him.  Tough shit.