And this is the beginning of the holiday weekend.  I'm off tomorrow.  No plans.  For me, it's just another day in Central PA.  This means I'll miss all those shoppers looking for a July 4th sale.  If you're going to buy paint, now's a good time... or an appliance.  Of course, many believe sales are store wide, they're not.  Lawn furniture might be on clearance right now, simply because they need to clear out space for the next big merchandising event.

There are nectarines on my tree, but they're small and quite few of them have problems, and I'm not just talking about spots.  Some sort of disease, I believe.  I don't think any of them will be edible.  This will be the 2nd year without a harvest.  If it happens again next year, I'll cut the sucker down.  I don't need a non-producing tree taking up space in my yard.

The cucumbers and cantaloupes have issues, too, of a different nature.  They're planted in small mounds of dirt that came from a bag of topsoil I bought early in the spring.  Well, besides the fruit, I seem to be grown tons of little mushrooms.  Now, isn't that interesting? 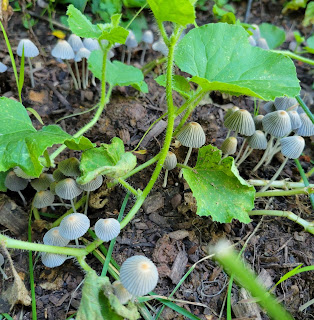 And, of course, the Supreme Court is edging the country to the right in regard to voting laws, those rules and regulations white Republicans are putting into place to try and maintain control over the country.  What else can you expect from a mostly white Supreme Court?  Clarence Thomas doesn't count, because he's a black man desperately trying to be white.  That man sold out his black self-esteem a long, long time ago.  He doesn't understand historians are going to see him as more of a traitor to his race then anything else.  I do find it odd that a man who is so virulently anti-abortion has no children, don't you?  It makes you wonder how much hatred he has for his race.