Can you believe that Sunday is a holiday?  At least for those of us in America.  We celebrate what the English call the 'Civil War.'  For us, we celebrate our revolution.  There will be fireworks around the country.  In the past, the store would close early so employees might enjoy those fireworks with their families.  Not this year.  I guess greed got in the way of patriotism.  Who will show up to shop Sunday evening?  Mostly foreigners who don't see July 4th as a holiday.  Of course, they also show up on Memorial Day, and Labor Day, in fact they shop on any day they don't recognize as a holiday.

I bought a small, window A/C unit for the bedroom.  Why?  Those 98 (F) degree days.  I'm in an old house, ten foot ceilings, with only one return vent on the 2nd floor.  When the temps are in the upper 80's (F) there is usually no problem, but when the temps hit those high marks I need to turn the thermostat down.  End result, it's 65 (F) downstairs and 88 (F) upstairs.  And those high degree days are not going to disappear soon. 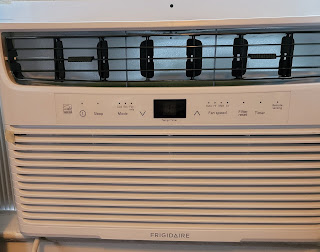 While on the Zoom call with my Navy buddies, one of them asked me to send him a signed copy of one my books.  I kind of agreed.  Later, he said me an email apologizing for guilting me into send him a book.  So I said, no problem, I send it after his wife reviews the book she bought 4 years ago.  Well, I got a message from her on Facebook yesterday morning asking why?  So I explained:  she challenged me to buy her paperback book of poetry (with black & white photos), which I did, and gave her a nice review.  Holy Shit Storm.  I received notifications 3 times  yesterday that she had messaged me in Facebook. I checked this morning and they were gushing with anger, how she was too busy to read, how my friend had turned her into a jockette, how she was a farmer (she had a garden), how I probably couldn't connect with the poetry in her book, and how she had to buy 4 copies of it to give to friends, and on, and on, and on.  My response was simple:  "So bitter.  And what a waste of words.  You could have simply said you weren't giving the book a review.  I guess this means Mike doesn't get a signed copy."  I don't mind pissing her off because she never bought the book.

Finally, the indictments against the Trump Organization were revealed yesterday, one of which was Grand Larceny.  That's a whopper.  Weisellberg's daughter said he'll flip.  I don't doubt it.  He's 73.  If you though Michael Cohen knew were the bodies were buried, this guy still has the receipts from buying the shovels to dig the graves.  And yes, of course it's partially political.  This is something the Republicans have been doing for years.