Yesterday was slow and uneventful.  The temps were hot, but didn't crack that 100 (F) mark which had been predicted.  In the evening we had brief dry thunderstorm, that was very loud for a few minutes.  Since there was no rain, I ended up going out and watering my garden.  My eggplants are getting large.  I picked 2 of my banana peppers.

For lunch, I made a cold meatloaf sandwich on fresh, homemade bread.  It was delish. 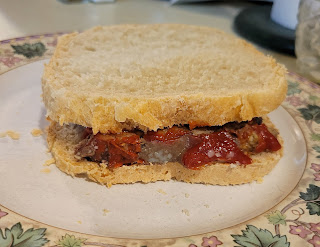 Windows is doing an update, so everything is slow.  I don't know if this is part of the Windows 11 package, but things have changed in the way I find pictures.  Something new to learn.
For those of you who didn't hear, last week the RNC was hacked by the Russians... or at least one of the cybermobs funded by the Russians.  Now, I don't know about you, but I think this is rather amusing.  I wonder if Load #45 even cares that his Besties are trying to find out what his party is up to, probably not.  Or, maybe they were just interested in getting all the email addresses for every MAGA head in America.
Hey, and I even saw where McConnell is beginning to really push his constituents to get their asses vaccinated.  Oooohhhh.  Maybe Mitch has finally realized his old ass can't get re-elected if half of his supporters are either dead or ventialted.