Hello Friday morning. The temps are only so supposed to hit the low to mid 80's (F) which is nice.  Ain't it damn shame I have to work, especially when NOAA is projecting temps for this area to be 10 -15 degrees hotter then normal.  Or maybe I should say, this is the new normal.  What ever the case, I'm wondering if the rains are going to cease as well so things will be able to dry out.  Right now it looks we're supposed to have soaking rains on Sunday.

Yesterday was slow at work.  I sold one measure.  We have 2 weeks left in this year's fiscal half and we're doing almost as well as last year.  Looking at our figures, it's difficult to believe some people are saying the economy's in trouble.

I gave Biggie a boost up onto the bed the other night and strained something, so I've pulled out the heating pad.  It works really well to loosen up the tight muscles circling my left buttock. ... Is that too much information?  I took this picture of the dogs on the futon when I was on vacation last week.  I'm thinking of calling it "The Epitome of Boredom."  By the way, you can see an original vinyl recording of Les Parapluies de Cherbourg which I bought several decades ago. 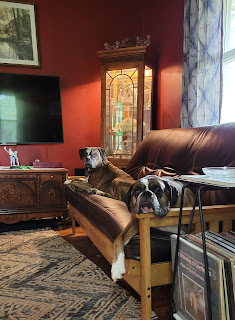 Why did I decide to learn French?  It was this album, and this movie.  Here's a clip with the ever beautiful Catherine Deneuve.  My French is not that good anymore, but that's how life moves on.
Oh, and I saw some sort of blurbing headline that Ronnie Johnson says he may not be the best candidate for Wisconsin in 2022.  I didn't read the article since this man is so full of shit.