Holy Crap!  It's Tuesday.  Tomorrow I have to go back to work... for 5 consecutive days.  Luckily, I did not have a lot of measures going into this mini-vaca, so the number of phone calls I have to make is minimal.  I don't mind talking to people face to face, however, I really dislike call them to ask if they're going to buy their flooring.  Me personally?  I never put myself into a position where someone's going to call and ask a similar question.  I usually have all my ducks in a row before I even talk to a sales person, and am usually sure I'm going to purchase.  The less I need to deal with salespeople, the happier I am.  Having to deal with someone who wants to play hardball to get a sale pisses me off.

My back is feeling much better today, though there are the occasional spasms.  I just need to remind myself that some of my lower vertebrae are fused and that I'm not as flexible when it comes to bending and lifting. The responsibility is mine.  Picking up a 118 pound dog?  Not in the best interest for my lower back.  Biggie is just going to have to understand.

The temps are supposed to climb into the mid 90's (F) today.  No rain is forecast.  Still, I'm going to have to go out and mow my lawn.

Also, my dentist sent me a text, I have an appointment for September 4.  I do believe I'm going to call and cancel.  I just don't feel like going.  My teeth are fine.  Getting older, I've realized my main concern now deals with having one of them chip or crack.

Here's a pic of one of my dahlias that survived the winter. 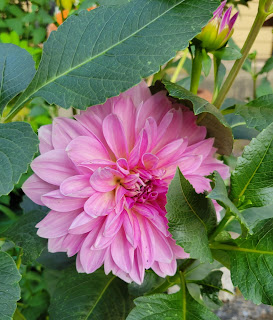 And if you're one of the vaccinated, there's a good possibility you might be growing a little angry at those who refuse to get the shots.  Tempers are rising, especially in areas of America where Republican / Conservative beliefs have been horrifically tainted by Loser #45.  While it's normal to have a certain number of people who have some trepidation about getting inoculated, the numbers in the red states are going through the roof.  Unfortunately, these people are beginning to piss off the rest of America.  Even more unfortunate is the fact that having only one shot doesn't quite protect one from the Delta variant.  Nothing is going to change the minds of these anti-vaxers.  Their anger is only going to grow.  My personal opinion is, if they don't want the shots, if the want to gamble with their lives, then let them.  The more they die off, the less power they'll have at the polls.  It's as simple as that.