Suddenly, In a Fish Bowl

So, we're entering another slow weekend.  Outside the temps are a cool 58 (F).  Now ain't that nice.  Quick reminder to myself, we're still in summer.  The dog days of August haven't even arrived on the scene yet.  Just wait.  They're forecasting thunderstorms for tomorrow.  That always means hit or miss.

I've started eating breakfast when I write this.  Breakfast has changed.  No longer am I chowing down on oatmeal, and nuts, and berries.  Now I'm serving up one egg over easy and a slice of homemade Italian bread.  More protein and less carbs.  I'm not worried about the cholesterol from a single egg yolk.  You usually don't really need to worry about these things if you're physically active.

I had an interesting customer yesterday, a rather large man in his late 30's (I'd guess) and his son (early teens, I'd guess) looking for indoor / outdoor carpet.  They were fun.  And the carpet wasn't for a deck, or patio, this gentleman runs a fish bowl booth for high school fundraisers.  You know?  Where you toss ping pong balls, trying to get them into little fishbowls to win a prize.  They were nice.  I do suspect, however, that being as large as he was, their life was not always going to be nice, and I felt bad for that. 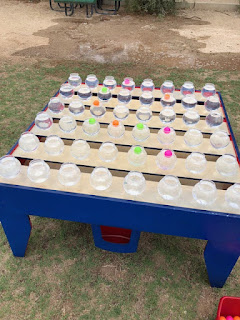 And I'm sure at least one 'F Bomb' popped out of the mouth of the Orange Anus yesterday when word came down that Congress can get a hold of his taxes.  Actually, I wouldn't be surprised if his mouth was still streaming obscenities and vulgarities.  And that little note was also dropped, the one where he told his acting AG to call the election corrupt and leave the rest to himself and the Republican Party.  It's as if he and his party were suddenly dropped into a fishbowl for the world to see their corruptness.  These people really are scumbags straight from Hell.  But then this is what you expect from the Spawn of Satan.