Well hello and good morning!  This is my 2nd day off in what one person at work called a mini-staycation.  I have been relaxing.  Taking the occasional ibuprofen for my back.  I switched from naproxen,  For some reason, the naproxen didn't seem to be able to knock out the inflammation.  Mornings do make me feel like a creaky old man.

I'm going to need to mow the lawn either today or tomorrow.  The weather's forecast to be nice both days, of course the forecasters have only been accurate about the heat.  Yesterday there was a 70% chance of rain and?  Nothing.  Not a single drop.  Which is good.  We've had way too much rain while other places have nothing but drought.  In time, people living in those stricken areas will begin to migrate.  This is how things have worked since the beginning.  Now, however, we are a much more mobile society so they'll drive to their new homes in places where the temps aren't so hot and dry.

I wore a pair of my new socks yesterday.  They're climbing socks, however, I didn't climb.  I only needed 4.5 miles to reach my goal for the week, so I rode 10.5 miles.  When I'm riding, time goes by fast.  My brain works.  Things just click, especially in the creative regions.  A friend says it's because I'm oxygenating the hell out of it.  What ever the reason, new ideas pop open like unseen vistas waiting to be explored.  Here are my climbing socks, in case you were wondering, and no, I didn't buy them from the giant orange home improvement retailer I work for. 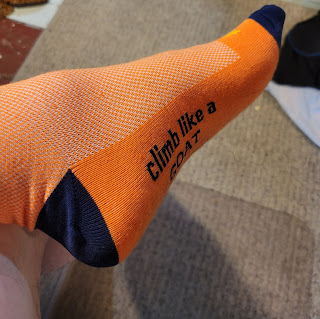 I saw where Chris Christie was mumbling gibberish about the unvaccinated, saying they don't want to be indoctrinated.  Now, isn't that ripe.  These very conservatives are trying desperately to indoctrinate Americans into believing The Big Lie.  The article is rather amusing.  He laments how our political leaders haven't done a good enough job explaining vaccines.  Notice, how he tries to incorporate all political leaders.  Anyone with half a brain, that automatically excludes Republicans, knows that the only political leaders who have been running a constant tirade against vaccination are... Republicans.  To do otherwise would insinuate their Liar in Chief was... well... a liar.  No news there.