Today is the last of my 3 sequential workdays.  Beginning tomorrow, I have 3 sequential days off.  Now isn't that nice.  One of these days I'm will need to sit down with a calendar and decide just when I'm going to go part-time.  Let me be honest, I do like the extra money coming in, so part-time for me might actually be working 24 hours a week.  At the onset of Lockdown, I worked 5 hour days and that was simply fine.  I will have to set up a little spreadsheet to calculate income vs expenses.

And yesterday, things were a bit skewed.  I had ordered one of the Xbox gaming consoles, the Series S version.  With the Series S, you download your games rather then purchase a 'hard' copy.   While I like purchasing a disc you can insert into the console, I took a long look at all of the games I had purchased and realized many were never going to be played again.  Besides, the series S was $200 less then the Series X.  Initially, the console was supposed to be delivered yesterday, how I changed the deliver date to Monday since I was scheduled off, (that cost me almost $6).  Yesterday morning, around 0800, I get an email telling me my console is out for delivery.  So I ended up going into work late.  Last evening, I set it up.  The blame for this mini-fiasco goes to FedEx, and I will be getting a credit since they charged me for nothing. 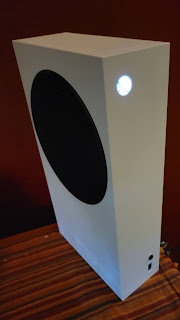 And what about that sorry sack of shit governor Kay Ivey?  So like a Republican, right?  They sure do like to point their fingers.  What surprises me is that she didn't some how manage to blame Biden as well.  Maybe tie in The Big Lie, a variation on the theme 'these people aren't getting vaccinated because Democrats are phony socialists.'  In conservative states, where the conservative media and conservative politicians have been working in conjunction to spread rumors about the invalidity of vaccines, counts are going up among Republican voters.  Isn't this ripe?  Ivey's been one of those reinforcing the falsehoods about vaccinations... until she realizes it's too late.  The one person she needs to blame more then anyone else is herself, of course she won't.  That would mean she's nothing more then a loser.