A patron of the Arts and Prosperity

Well, I do get to go back to work today, and tomorrow, something I will need to endure for the next 5 days.  Don't get too close, my lack of enthusiasm is contagious, not as bad as Delta though.

No rain is forecast, so that's nice.  The temps are supposed to hover around in the mid-80's, so that's nice, with the occasional thunderstorm.  I need to mow my lawn, so that will probably take place either tomorrow or Friday before I go to work.  Hopefully things will dry out a little more by then.

On the Simon Biles bit?  I feel sorry for her.  America only wants winners.  Counting the gold medals is more important then the competition.  We want our athletes to be more stellar and less human.  And it isn't just America, however here too many feel victory needs to be assured.  But doesn't that take the human element out of the equation?  You may think me odd, but when I saw the UK won a medal for Mountain Biking I felt really pleased.  Way to go Brits!!!  and France!!! and Slovenia!!! and Austria!!!  Somewhere in our recent past, America seemed to lose our understanding of sportsmanship, and that's a shame.

And I bought myself a small statue of Ganesh.  He is a patron of the arts, and also a destroyer of vanity.  And, while I don't practice Hinduism, I don't see why it isn't a good idea to have him on my side. 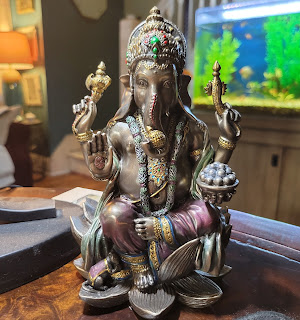 Oh, and I saw that a candidate, Susan Wright, supported by Loser #45 lost in a special election.  So much for the fading power of a lying sack of shit, known by so many names, all of which are derogatory.  Voting was said to be 'soft' throughout the district, and, of course, his minions are now blaming her, saying she ran a terrible campaign.  I'm surprised she hasn't trotted out their favorite rotten chestnut, voter fraud.