It Sucks to be a Conservative

Well, I baked 2 loaves of bread yesterday and... they fell.  That's right.  They were all nice and fluffy when I put them in the oven and 30 minutes later they were 2 inches high.  I'd show you pictures, but then I'd have to lie and tell you they were fat flat breads.
There were primaries yesterday and Biden swept them all.  He offered an olive branch to the Bernie supporters and Bernie... gave a 20 minute live stream in which he talked about legislation he was going to bring to the Senate.  Hhhmmmm.  Not one word from his lips about the primaries or his continuing losing streak.  He knows which path he is walking down.  He knows his job now is to unite... and attack the Idiot Jerk in the White House.  Wow, it's really going to suck to be a Conservative.
I don't dwell on the virus much.  I only looked at a map of the United States once yesterday, and that was last evening.  As of 9 PM last evening, there were 10 confirmed cases in Cumberland county.  Up here, the liquor stores closed yesterday and my brother-in-law's favorite hang-out, the Lawnton Legion was closed.  Elton John has been postponed until sometime in either late July or August.  Most Americans have been taking this virus seriously for the past 3 - 4 weeks.  Who hasn't?  Republicans.  Who doesn't understand the need for quarantine?  Republicans.  They don't understand it's going to really suck to be a Conservative.
I saw where Governor Abbott, of the once red state of Texas, has admitted publicly Covid - 19 is going to spread through the state exponentially.  In fact, this thing is going to go through those deeply red southern states like shit through a goose (Patton said that).  There are not a lot of liberals or progressives in those deeply red southern states.  All those Republicans down there are wake up (maybe) one of these mornings, wipe the sweat from their brows and cry "damn, don't it suck to be a Conservative."
I see the Idiot Jerk is telling people he knew this was going to be a Pandemic long before anyone else.  Someone should tell this dumb ass there are thousands and thousands of sound bits and video clips out there of him making the total opposite claim, that you can go to work, that it'll be over in a few weeks.  Who believes him?  His Republican base.  I don't know if they will ever understand how much it sucks to be a Conservative.
Marc had posted this a few days ago.  I thought now would be a good time to repost. 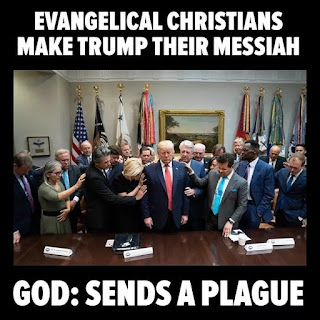 Keep in mind who put this loser into the White House.  He is not going to answer their prayers, but they are going to realize how much it sucks to be a Conservative.
Posted by Dave R at 5:57 AM