Wednesday!  And another day off.  Sadly, the forecast is for drizzly weather for most of the day, with temps only in the mid 40's (F).  Not a good day for lawn work.  Yesterday was sunny and mild.  My peonies are zoom zooming all over the place.  Of course, this is to be expected because it is "spring."  Both my peach and nectarine trees are filled with burgeoning blossoms.  Here's a pic of the peach tree looking towards the front yard. 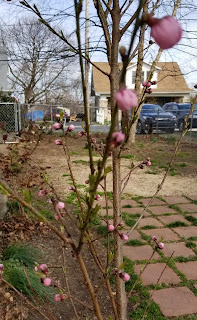 And, for those who are really worried about Covid - 19, don't worry.  Evidently everything is going to go back to normal by April 7.  This is what the Idiot Jerk in the White House says.  He says this is to help the economy.  At least, that's what he's saying publicly.  Personally, I think it has more to do with his resorts... you know, the ones that are closed down?  I don't doubt he is more concerned about losing money than he is the safety of the American People.  He has no problem putting people in danger just to make a buck.
Of course, one of the most preposterous things this dimwit has done is set a timeline for when this is going to end.  For those of you who are really devout, rest assured, you'll be able to go to church on Easter Sunday.  Didn't anybody think to tell this duffer that the worst thing you can do in a pandemic is set and end date?  Just a few hours after he carved that date in stone an urgent warning was made to all those people leaving New York:  self-quarantine for 14 days.  Son of a bitch!  Still, he has to satisfy his base.  The Cracker Jack Christians desperately need to be sitting in a pew on their most holiest of days.
Raise your hands if you think Liberty University is going to turn into a Covid - 19 hot spot.  Those young people are just coming back from spring break, and they're still under the belief they're almost immune, and so they didn't self-quarantine, and....  Oh... Shit.
Legislation has been passed to help those most destitute during this crisis:  the corporations.  Oh, sure, the small guys are going to get some help, but mostly it's the big guys who are getting bailouts. As someone who work in retail home improvement, it's the little guys, the Mom and Pop contractors that are going to be hurting more.  Conservatives have never really cared for them.  Nope.  Their fascination with greed has always drawn them to the flame of corporations.  The same thing happened when they did the bailout for farmers because of the Idiot Jerk's trade wars.  Most of the buckos went to the corporate farms rather than the Mom and Pop farms.  It's a size thing, you know?  For Republicans, bigger has always been better.
I'm sure everybody saw where Putin, donning a hazmat suit and venturing into a hospital, upstaged the Idiot Jerk in the White House.  The Russians also admitted that Covid - 19 is far worse in Russia then they had led the world to believe.  Like many other European countries, they are on the verge of going into a complete lock down which will most likely last past Easter.  Our Idiot Jerk is not going to do anything as risky as that... the hazmat suit, you know?  He might dress Melanoma up in some frilly, designer suit and maybe have her stand outside a hospital, followed by a 2 month isolation period in that building he owns in New York (aka Ground Zero).
Finally, I'm considering yoga if we end up having a 3 or 4 weeks shut down.  You know, something to include in my cycling adventure.  Yesterday I had a nice ride in Gascony.  The other day I took a ride through Burgundy and got behind a grape (harvester, or picker, or what ever it's called).  Damn those things are big.