Evangelicals are demanding their sacrifice

Okay, so it's Saturday and I'm sure a lot of you out there are planning fun filled weekends!  I know there are a lot of people going to be hitting our 'life sustaining' garden center in order to purchase their 'essential' mulch.  For many, Covid - 19 is a serious issue... somewhere else.  Up in New York, for example, it's really bad.  Here?  We are on the cusp of going bad.  And, of course, people don't stay home.
My friend Betsy, from York, was called yesterday and told her position was being eliminated.  She worked one on one with handicapped individuals and new guidelines have been issued.  Those who are handicapped tend to have many more health issues than your average person.   From what she was telling me, it seems as though they are going to create 'safe houses' for them until this thing passes which makes her employer seriously over-staffed.  This is another casualty because of the incompetency in the White House.
And I'm beginning to see push back on the Idiot Jerk's decision to send everybody back to work around April 7, just in time for his Evangelical Base to celebrate Easter.  That's almost word for word what I read in Bloomberg, and that source is not alone.  There are 2 reasons he wants people back to work:  if the economy sinks, so does he, and his Evangelical base.  He needs his base.  He made a deal with them:  he would make this country as Cracker Jack Crazy Christian as they wanted if the supported him, and protected him.  And his Crazy Christian base?  They don't care how many Americans get sacrificed as long as they get what they want.  They are the selfish face of Christianity.  They are also Republicans... and their favorite pronoun is 'my.'  Covid - 19 is going to piss the hell out of them before it ravages them.
The weather yesterday was wonderful.  Temps were in the mid 60's (F).  I had the back door open and the dogs were running in and out... and in and out.  And then around 7 PM they crashed.  Tired puppies they were.
I did manage to take this picture of my nectarine blossoms.  Nifty, huh? 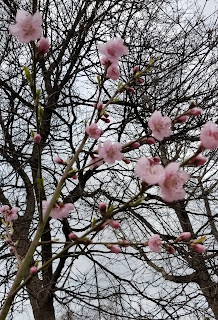