The Buck Stops at 1600 Pennsylvania Avenue

Well, here it is, the first day of my weekend, which starts on Tuesday this week.  Surprisingly, most of my laundry is already done - I left work early yesterday.  I'm only working 5 hour days this week and next week.  What happens after that?  Hell, it's anybody's guess.
The store was steady yesterday, slow in the morning, but then business picked up in the afternoon as bored people, forced to stay home from work, decided to take advantage of our 'life sustaining' status.  They are all dumb shits who say things like "well, not everybody's going to get it," and "it's a hoax," and "this whole thing's been blown out of proportion by the media."  Keep in mind I live in a very Conservative area.  We have a lot of loyal, old Republicans living here... for the time being.
What are my plans for today?  Well, as I type this, I'm also clipping my fingernails.  Later on, I'm going to drive to Giant to pick up dog food, they should have started restocking by now.  Sometime this morning I'm going to one of my reader's homes to pick up "The Body in the Well."  Her initial response: really like it.  This is the reader who thought "The Body in the Tower" was a bit dry because of the cycling bits.  After that, I'm going to make a corned beef and take a ride on my bike, and the work on my Greek.  Busy day for me.
I saw where the Idiot Jerk wants everybody to go back to work after 15 days.  Because of the economy, you know?  Remember way, way back, about 4 weeks ago, when Covid-19 first raised its ugly head, he had been saying things like "it's not going to be that bad," and "you can go to work with it?"  Well, his thinking has never really changed, has it.  His base has never really comprehended the seriousness of this illness.  And you know those Evangelical advisers who lay their hands on him are whispering "don't worry, God will protect us."  You know who I'm talking about, don't you?  Human stains like Joel Osteen, who's discovering 'live streaming' can be far more lucrative than he initially imagined.  And then there's that dumb shit David Green, who owns Hobby Lobby.  I saw this on I Should be Laughing and was morbidly attracted by the sheer stupidity.  Holy Shit!  This is a first class example of Evil Greed.  I can see the headlines now "Hobby Lobby Hot Spots Spread Covid-19."  And then there's that dumb shit Lieutenant Governor from Texas, Dan Patrick who say he, and other grandparents, don't mind getting sick and possibly dying as long as it helps the economy.  I wonder how many grandparents and seniors citizens he is really speaking for... my guess is not many.  He is terribly concerned that Covid - 19 is going to change the 'American Way of Life.'  This man is a soon to be 70 year old fool.
Change is on the way, and that terrifies Conservatives.   It horrifies Evangelicals.  They want the world to be rigidly orderly.  For them blessings are big bank accounts, and they're frightened at how fast this little virus is draining their assets and leaving only liabilities.  Tough Shit.  Someone needs to pull out the passage in the Bible that says 'believers get rich.'
And in this country, the Idiot Jerk wants everybody to go back to work.  He actually said they are working on masks for those infected so they can go back to work.  That is simply insane.  He doesn't understand the buck is going to stop at 1600 Pennsylvania Avenue.
Finally, to end on something a little bright, here's the latest picture of my peach blossoms. 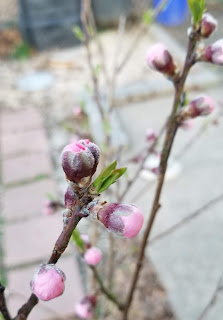 Tomorrow, maybe a pictures of my nectarine blossoms.