The 3 Faces of Mike

It's my 'Off Again Day.'  Yep, no work today.  I hope the weather is nice, there are a few things I need to get done outside.  The tips of all of those bulbs I planted in the fall are beginning to push up through the soil.  It's almost time to plant the zinnias.
I thought it was interesting how Wall Street responded to Biden's big Super Tuesday win.  The stock market climbed almost 4%.  That was not only a smack in the face to Bernie, but also the Idiot Jerk in the White House who likes to glory in how 'he' is personally responsible for the economy.  Of course, it has already begun to retreat.  The world has a bit of a health issue.
Speaking of that little problem, yesterday, while I was I work my phone buzzed with a notification.  The Stepford Man, who goes by the name of Mike Pence, and his Task Force were leaving some sort of meeting.  Of course there was a picture (there's always a picture) and I couldn't help but think how phony he looks. 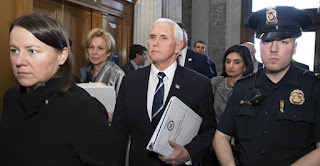 At first glance, I thought I was looking a pure arrogance, the upward tilt of his head as he tries to keep his nose higher than those around him.  Then, looking at his thin, unsmiling lips, I wondered if perhaps he might just be very angry.  He's failed with health issues before in Indiana, and now he's been saddled with something global... a growing pandemic.  Shit!  However, then I glanced at his eyes, glazed and unfocused, and realized I was looking at stupidity.  This is a man whose beliefs define everything, a man who is totally lost when things fall outside their narrow boundaries.  Looking at those 3 faces of Mike, I couldn't help but wonder if the only thought rattling around in his noggin was "but this never happened on 'Leave it to Beaver.'"
Posted by Dave R at 6:23 AM