Sunday!
We were very busy yesterday.  You know, this is what happens when you're declared 'essential' and everybody else shuts down.  Stupid people believe that if there's only one place open in town, in spite of State of Emergency, they need to go there.  It's Saturday, they think, my day off, I need to go somewhere.  Never underestimate the stupidity of people.  A rather young gentleman asked me "hey, why is the store so busy today?"  I responded, "because we're considered essential, we're one of the few places allowed to be open."  His reply:  "Really?"  I kid you not.  We had a customer complain to the Service Desk that we were more interested in talking about being sick than waiting on customers.  Yep, that happened.
This area is populated by stupid Republicans who cannot believe their Idiot Jerk would lie to them. They say things like "the media is blowing things way out of proportion."  They will only understand the reality when it effects them personally, and until that happens they will smugly pass judgment.
I did change my schedule, I'm only working half days.  As Conservative minds begin to crack and shatter at the truth, they will begin to stay home to avoid being contaminated.  A week from now they will be seriously concerned as the death toll in the state continues to rise.  Because of their Republican mindset, we are going to be just like Italy.  A lot of the older conservatives will die.
To give you one example of just how damn stupid these Republicans are, both the House and the Senate attempted to push through legislation overturning the Sate of Emergency declared by Governor Wolf.  They said it was 'unconstitutional.'  They have absolutely no idea they just shit away their future in politics.
In case you didn't know, this is how Evolution works.  The smart ones sit patiently at home waiting for the dumb ones to out, get themselves infect, and the die.  We are seeing Survival of the Fittest... and smartest.
Finally, I was going to pop in a pic of some of my daffodils but then last night, as I was going through another slow edit of the book, I looked up and saw Biggie sitting on the sofa looking at me.  I call this "Biggie Waits." 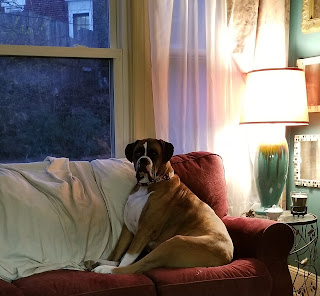