So, it's Monday.  My schedule looks like it was written by a monkey on crack. Yeah, this is the week I get to work every other day... for the entire week.  I do have 4 days in a row coming up, but that's not for another 2 weeks.
By now everybody has heard the news that Mayor Pete is out of the running.  I was impressed by how much press coverage his departure received.  This gay man has achieved so much more, gone so much farther in American Politics then any other gay man in history.  I do not doubt his life in public service is just beginning.  I know the Republicans are frightened he might decided to run for governor.  One loud thought shoots through my head when I think of that:  Run, Pete, Run!  Take them down and take them out.
Overnight there was another death from the Coronavirus.  More cases were diagnosed in more states as the virus spreads.  And you know Sister Mary Pence is on her knees praying this thing acts like the flu and disappears in April...  In fact, from what I've heard, that is the foundation of this administrations policies.   Yep, the Idiot Jerk has surrounded himself with henchies who are telling him exactly what he wants to hear, that spring will end the coronavirus.  Except this isn't like the flu.  Warmer weather is not going to bring about the demise of this new disease.  This is obvious since new cases are cropping up in countries with moderate to warm climates.
If you read any of the financials, you've seen a number of opinions on the corporate prospects of 2020.  They're not going to be good.  CEO's are hoping their corporations will be able to report slim profits... though it's becoming more apparent daily that is not going to happen.  This is the terrible Karma the Republicans have wrought upon the world... and believe me, it is the world.  Such is the ruination brought by greed.  In Brazil, deforestation  is happening so farmers can grow soybeans to export to China because... of the Idiot Jerk's Trade Wars.  In America, billions are borrowed to aid farmers hurt by the Idiot Jerk's trade policies.  What goes around, comes around.  The End of the Republican Party is nigh.
And who's going to help bring them down?  People like Mayor Pete. Good people.  Honest people.  Diverse people. 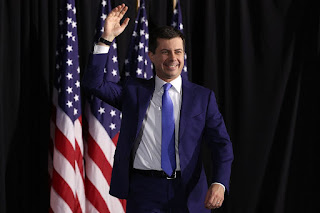 Do not doubt, he will play a major part in the reshaping of America.