Oh, dear me, business was slow yesterday... really slow.  I wonder why?  People worried about coming down with a cold... or something?  I don't know.  Maybe it was just a slow day.  Tuesdays are like that sometimes.
Out of curiosity, I put a tad of cardamon in my oatmeal this morning. 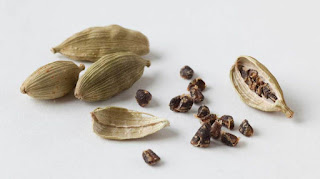 The result is... interesting.  Normally, I only use this spice when I make Chai Tea.  For right now, I think that's where it will stay.  Oatmeal with peanut butter does not make for a good combination.
There were primaries yesterday... again.  Bernie continues to fall behind.  I saw where his speechwriter shrieked something about Warren, how her failure to jump behind the 'Bern' is hurting his campaign.  This is rather amusing since the same person was writing down words used by the 'Bern' to attack her.  While Bernie continues to 'moonwalk' backwards, Biden is beginning to accelerate forward.  Polls indicate most Democratic voters see Uncle Joe as the one best suited to wipe shit eating smile of the orange baboon's face.  You don't think I was too negative there, do you?
I read that as of yesterday the CDC could only verify that 4384 people had actually been tested.  Son of a bitch.  The director of the CDC has call the roll-out of testing a terrible blunder.  Hhhmmm, now who should Americans blame?  Probably the same person who wants to give Americans a great tax cut... until after the election.  You see, the Idiot Jerk believes Americans are going to endanger themselves by spending that tax cut.  His philosophy is the same as other Republicans:  if they got it, they'll spend it.  The Idiot Jerk doesn't understand that when grandmas and grandpas start dying out there, people are going to blame him... and his base.
And finally, I find it interesting that the Idiot Jerk has no rallies planned in the foreseeable future.  I understand he's a germaphobe, so this Democratic Hoax might be scaring him.  Or, it might be that the last thing he wants is for all of his aging, white supporters to die off before the election.  Either possibility is... well, quite spicy to think about.  I mean, the 5 phony bone spurs he used to stay out of the military shows how gutless this sack of shit really is, so a virus that puts a big target right in the middle of his back?  Priceless.
Posted by Dave R at 6:36 AM