A slut for Vlad

It's Saturday and I am definitely not in a park and it is definitely not the 4th of July.  Nope.  It's drizzling outside and going to be like this for the rest of the day.  Tonight... storms.  All the rain that's drenching the central states is moving east.  So far May has been off to a wet start.
I saw where Oprah was talking about Mayor Pete and either tried to be funny... or something worse.  She said she had problems saying Buttigieg and so called him either Buttabeep or Buttaboop.  I wonder what she'd say if people did the same with her name, you know?  I mean, is this her way of being humorously judgmental?
Anyway, sometime this evening I will hit my hump moment.  From then it's a downhill slide until Tuesday.  Unfortunately, that is the only day off I have in what is an 8 day stretch.  Not that we're busy.  Things are always slow in flooring at this time of the year.  It's garden time!  and lawn time!  These are the months when people think about building decks, or putting in patios.  If they have kids, this is not prime carpet month... not with summer around the corner, when little feet will be running in and out, and in and out.
And, of course, the Idiot Jerk in the White House and his bromo / homo love interest Vlad gushed to each other during an hour long phone conversation.  The Idiot Jerk cackled and giggled about 'no collusion.'  What the Idiot Jerk didn't know was that while he was flirting his ass off, Vlad was approving plans for Russian involvement in the 2020 election.  Vlad is more concerned with knocking America out of the number one spot in super powers.  He wants Russia to be the most powerful country in the world.  Of course, the Idiot Jerk will give him what he wants, he doesn't care if the world thinks he's a slut for Vlad.
Oh, dear me, it's almost time to go to work.  I have a decent little carpet sale going through today:  single older couple, no kids.
Since, today is May the 4th I might as well do say what everybody else is saying: 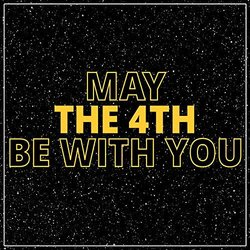