All about my Peonies

Okay, so it's Thursday and I slept in.  I stayed up late watching TV.  I was looking through Amazon movie listings and saw "Fiddler on the Roof."  I hadn't seen it in about... oh... forty some odd years and remembered the songs.  There are some really good dance numbers.  So, I paid my little rental fee and sat back preparing to enjoy a little trip down memory lane.  While the songs and dances (done my some very talented male dancers) were everything I expected, I was surprised by the humor, and not in a good way.  I was quite disappointed by all of the bad Jewish stereotypes.  Times have changed.  It's kind of odd to think someone thought a musical-comedy about the breakdown of tradition, anti-Semitic racism, and forced immigration was a good idea.  If someone decided to do a Spanish update using Guatemalans rather than Russian Jews, do you think it would get off the ground?
And Alabama passed the most restrictive anti-abortion legislation in history.  Their old, fat, white female governor signed it into law.  They're hoping it will go to the Supreme Court.  Dumb shits.  It will never get that far because it is so blatantly unconstitutional.  Dumb shits.
Finally, let's get to the meat of today's blog.  My peonies.  Now, I'm sure there are some of you out there who think I just need to fix my spelling.  Well, you're wrong.  You see, I have some of the largest peonies around.  In size, no one can even come close.  On one bush alone I have over 60 buds. 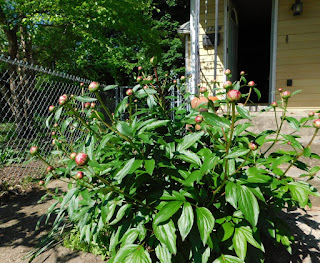 And that's just on one bush... I have several... bushes, that is.  What is nice is that they don't require any special care.... no special handling.  And the blooms are big, easily the size of a dinner plate.  Every year I post pictures.  You see I'm really quite proud and like to boast about the size of my peonies.
Posted by Dave R at 9:54 AM