Well, the weather's supposed to be crappy today... and I'm off.  I am planning to try and get some lawn work in:  I have spearmint and cilantro which need planting, and there's weeding... oh, my gosh is there weeding... and mowing.  Everything is so green.  When you have to mow your lawn more than twice in one week you're getting too much rain.
I went with friends to see "Tokien" last evening.  We all thought it was very good.  If you're hoping for a linear biography you will be disappointed.  Scenes of his childhood are juxtaposed against harrowing, almost hallucinatory scenes in the trenches of World War I, where dead bodies are left lying where they fell and disease was rampant.  There are those who wish the film had microscopically examined the author's early life and school years, however they fail to understand how much the war traumatized him.  Fantasy allowed him to escape those memories and deal with life after the Great War... the War to end all Wars. 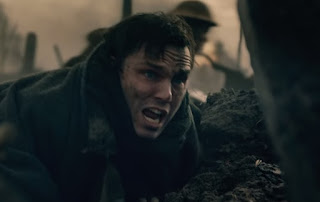 As for the Idiot Jerk and his minions... I guess Larry Kudlow actually went on television and contradicted his boss by saying that yes, the American people were going to pay the prices for the tariffs against China.  And, it seems, China has pretty much decided to give the Idiot Jerk the finger.  Oh, well, this is to be expected from a financial moron who's early tax returns clamor loudly about his losses.  I'm betting when we finally discover his true net worth it's going to be shockingly low.