Wednesday means weekend... at least for me... at least for this week.  I'm off today and tomorrow and the weather is supposed to be very nice with temps in the mid 70's.  Oh, and the sun is supposed to shine as well.  I suspect the dogs and I will be sleeping well tonight.
While I had originally thought "The Body in the Tower" would be out in mid-July... well, it looks like I was wrong.  Things appear to be coming together faster than I had originally anticipated.  This is fine with me.  There is just one reader with an outstanding copy.  I've personally read the entire work through 4 times... that's a lot of reading, and am approaching the point where I start to skim.  I've already passed what I call the 'decorative stage,' when color gets added, where the lap pool gets some shimmering blue tile with goldfish accents.
And, speaking of color, more than a dash is beginning to explode across my yard. 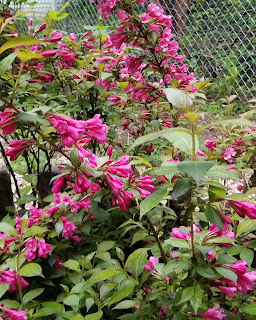 And things are getting a bit rocky in the mid-east.  That's to be expected.  We have an ultra-conservative Idiot Jerk in the White House who has ultra-conservatives into positions of power.  The problem is that ultra-conservatives have a very, very sensitive gag reflex when it comes to negotiation and compromise.  Their selfish nature always makes them vomit at the mere suggestion they might want to talk... and maybe give a concession.  Their most favorite word in any language is "my.'  Their 2nd most favorite word is "no."  They never weigh the pros and cons in the decision making process.  They, and the Idiot Jerk  in the White House, have one striking commonality:  they never think things through.  They see things in either black or white... and in their tiny, little minds they are always white right.  The fleeting thought of a dash of color simply terrifies them.

Email ThisBlogThis!Share to TwitterShare to FacebookShare to Pinterest
Labels: Donald Trump, Middle East, purple, The Body in the Tower