Well, here it is Monday morning... and not only is it the beginning of a new week, today is April Fools Day.  Wisely, I took a vacation day.  No jokes on me... unless the dogs decide to pull one.
Of course we know, Kellyanne Conway has her calendar all screwed up.  She thought yesterday was April Fools Day.  You know what I'm talking about... that little joke of hers regarding Biden and his 'hair kiss.'  She needs to get serious.  She's working for a scumbag who bragged about grabbing women's pussies, and when accusers came forward he called them liars.  He called them worse then liars.  Here's a little truth Kellyanne needs to learn:  unless your own ass is free of shit, don't point to someone else and say 'something smells funny.'  But then this has always been a conservative tactic: distraction by pointing.  The Idiot Jerk in the White House does it all the time in his attempt to create a host of phony targets.  Unfortunately the only ones who are buying his blame game are his base, which is why his approval rating will never get above 43%.
The polishing has started on "The Body in the Tower."  I working my way through a 'slow read' highlighting, crossing out sentences, adding in sentences, and rephrasing paragraphs.  In "The Body on the Lawn," I moved chapters.  That's not happening here.  I was better organized.  I have a friend who has a copy, and she's doing the same thing.  Just because something makes sense to me, doesn't mean it's going to make sense to the reader.  Once this phase is complete and the corrections done, a copy will go to the gent who's handling the editing process, and another to Gloria for another 'opinion.'  In the creative process, my opinion amounts to zilch, it is those of others that count.
Finally, an old Navy friend posted a group picture in Facebook. 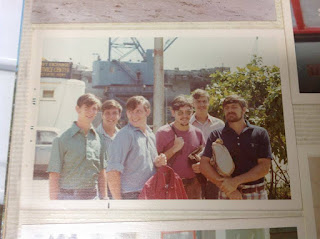 It was taken at Subic Bay Naval Station.  I don't know where we were going, not into to town though, since the guy on the right never went into Olongapo.  I find it funny that the way the light is hitting me I look like I'm missing a shoulder.  That's right.  I'm the one in the green shirt.  I also find it amusing that I seem to be one of the taller guys in the picture.  I was 5'8" when I joined the Navy and almost 6' when I was discharged.  Does this mean I'm a grower?
Posted by Dave R at 7:12 AM

Email ThisBlogThis!Share to TwitterShare to FacebookShare to Pinterest
Labels: April Fools Day, Donald Trump, Kellyanne, size, The Body in the Tower, US Navy