So many things to do... so little time.  Let's see, there's laundry, and dusting, and vacuuming... and those are just some of the wonderful chores calling my name on this, my first day off after working 6 days in a row.  Oh... joy.  Outside, I want to get more more seeds and tubers and bulbs into the ground.  They're forecasting showers for this afternoon, so I'll need to finish that chore this morning sometime... probably after I go to the store.  I'll be planting some Liatris spicata, also known as Blazing Star.  I chose it because it will grow long, and puffy, and will stand tall among the other flowers.  Standing tall is a good thing. 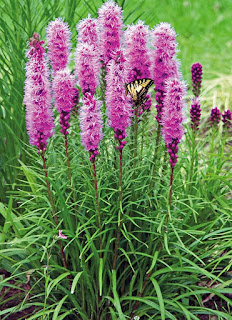 I don't know if butterflies will suck the nectar or not, but I do have hummingbirds.  We shall see if they start hovering around the backyard.  Perhaps Biggie will snap at them, believing they're a snack.  He does that with the big, black, buzzing bumblebees...  they always get away.  I wonder what would happen if he ever actually snagged one.  I'm sure he'd get a funny look on his face just before he'd try and spit it out.  Dog's don't like buzzy things in their mouths.
Brexit got a big delay... which, I suspect, will not go over well with the Bexiteers.  They want their divorce from the EU, and they want it now.  They know that the longer it takes to finalize, the more likely it will never happen.  Those who so desperately wanted it are not getting any younger.  Change happens, if you don't accept it, if you fight it, you will be left behind, forgotten voices buried by time.
Whether they like it or not, the same thing is happening in this country to the MAGA heads.  They are aging.  With every election cycle there will be less and less of them.  And the Idiot Jerk in the White House...?  Everyday he proves how unfit he is growing.  Yesterday he claimed never to have heard of Wikileaks....  Either he's lying, or he's showing severe mental incompetence.  I suspect it's a lot of both.  What we may actually be seeing is his transition from failed president to failed puppet-head.  If that's true, we know who's pulling the strings:  the 2 Stevies, Pompeo, Bolton, Mulvaney, and those crazy Christian Evangelicals.  Of course, this is all hypothetical.  In reality he may just be the Big Giant Head behind their evil.