Well, it's Thursday, my 2nd day off in a row and I... slept in.  I had set the alarm for 0430, however Biggie got me up at 12:30 and 2:30 to go out... he seems to have a lower digestive tract disturbance; something he ate... no doubt.  Everything looks tasty to him.  Anyway, I turned the alarm off and laid back down and... slept in.
Yesterday I got a lot accomplished.  Groceries? check.  Haircut? check.  Around mid-morning FedEx delivered the outside storage box I had bought - it looks like a big bench.  That was assembled, tools were stored in it, the grass was mowed.... and I got a good 45 minutes of cardio.  Even the dogs were tuckered out. 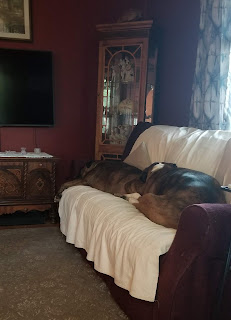 And it's official now, Biden is running for president.  He's old.  If he wins he will be oldest president ever elected.  Biden scares the shit out of the Idiot Jerk in the White House because he is Centrist and the country is overwhelmingly Centrist.  The Idiot Jerk represents the radical right, those wanting a dictatorial president.  Biden needs to choose his running mate wisely.  As most people already know, as does he, his will be a one term presidency.  He is going to be the transition back to sanity.  He will stand for ethics and values, those attributes the Idiot Jerk shit away decades ago.  My money says he will choose a woman for his running mate and the Republicans will go ape shit.
This will get ugly as the GOP realizes they will need to do something to keep from losing women's votes.  You can bet the Idiot Jerk's strategists are already whispering about dumping that white sinner, Mike Pence for some nice, white Evangelical woman.  Unfortunately, the Idiot Jerk's base is shrinking...  The more they realize this, the more hateful they will become, and at some point they will just stop voting.
In 2020 1/3 of the electorate will be minorities.  That number is only going to increase.  In 2045 minorities will make up 1/2 of those casting ballots.  Power will shift into their hands much sooner then that.
Posted by Dave R at 8:33 AM