Blowing in the wind

Well, here it is, Thursday.  This is my first of 2 days off in a row.  I'm happy with that.
And for those of you who haven't heard... the Idiot Jerk in the White House has decided that windmills cause cancer....   ....   (stunned silence) ...  Now why you know he's the Idiot Jerk, though I'm sure most of you knew already.  What he really meant to say was "windmills take jobs from coal miners."  I have yet to see anyone from the Administration even attempting to qualify this inanity.  Maybe they think people won't notice since so much of what comes out of his mouth simply defies common sense.  If it's not because of the coal industry, then it has to be because of his hair.  Yeah, now that makes sense, too. 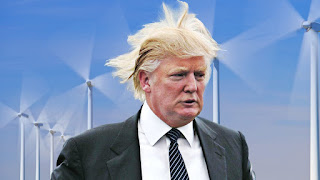 Oh, and Mitch and Co. went nuclear yesterday.  They want to get as many conservative judgeships as possible.  This is how they plan on forcing the country down a narrow minded path which only a minority of people want.  These Republicans are so damn stupid.  I mean, they are really dumb.  They do these changes without even thinking about what's going to happen when the Democrats take over.  Look at the House of Representatives.  When they had the majority they were constantly tweeking the rules and regulations to give themselves more power to investigate, to subpoena, and to challenge the White House.  Now the Democrats have the majority and those powers to investigate, to subpoena, and to challenge are now in their hands.  One can only wonder if Trey Gowdy is looking over his shoulder saying "oh... shit."
Anyway, I managed to get a couple of pictures of the dogs playing in the writing room (formerly the dining room). 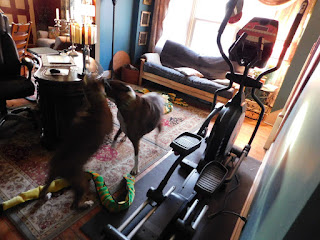 They do make me laugh.