Yesterday was a good day.  The weather was very, very nice.  The temp went up into the mid 70's (F).  Warm temps mean the back door stands wide open; the dogs go in and out at their own whimsy.  I cleaned up along the side of the house and started clearing away the winter debris from the back corner of the fence, filling 2 big 30 gallon bags.  I took pictures.  Here's one. 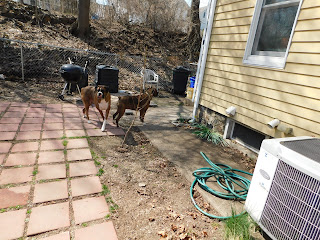 That's my hill behind the fence.  It's very steep.  My land extends another 25 feet back from the top of the hill.  One of these years I'll have someone come in and clear away the scruff, run a pathway up, and extend the fence.  My yard is large, it's a good selling point, the hill, unfortunately, is not.
And I saw where Joe Biden is having what they're calling an 'Al Franken moment.'  An assemblywoman from Nevada is claiming he kissed the back of her head.  She claims she was mortified.  When you look at the horror stories which have surfaced as a result of the #metoo movement, when you look at what Al Franken was accused of... groping a lot of buttocks (he's evidently an ass man) these accusations are enough to make you wonder.  Biden's accuser talks about getting justice... and I'm thinking, wait a minute, she did not have a Brett Kavanaugh moment.  He did not throw her down on the bed and drunkenly try and rape her.  For those who don't know, Joe Biden is a touchy-feely kind of guy.  He touches everybody, and not just women, he touches men too, lays his hands on their arms or shoulders, and even knees.  Google it.  There are literally thousands and thousands of pictures of Joe Biden touching people.  Instead of writing about how 'mortified' she felt, she should have searched for pictures of 'Joe Biden kissing women on the tops of their heads.'  Is a touchy-feely Joe Biden a problem?  Well, for some I'd say that answer is probably yes.  Is his being touchy-feely a reason vilify him?  No.  If he gets the Democratic nomination for president they're going to have to decide?  Vote for Joe, or possibly endure another 4 years of the morally degenerate Idiot Jerk in the White House.  Think about it.  Oh, and I just saw that Lucy Flores, the woman behind the accusations, is a Bernie Sanders supporter.
Posted by Dave R at 7:48 AM