The sky is overcast, the clouds are a muddy grey and yellow.  There are storms north of here.  Not torrential downpours, heavy, but not the equivalent of a fire hose, rather these are the terminal pitter patter, pitter patter of soaking rain with no place left to soak.  And they're coming our way on this, the second day of my weekend.
Our scheduler is on vacation.  She get back on Monday and I will need to talk to her.  I schedule vacation days for myself so I don't have to work 40 hours each week.  She and I have an agreement giving her the ability to override those requests if she needs the hours.  Well, she's over riding all of them.  This week was approved for 32 hours, next week was approved for 32 hours, and the following week as well.  She has me scheduled to work 40 each week.  Full time for us is 30 hours.  If you work more they need to give your benefits.  If she can't make this work, I'll just have her change the total hours I can work per week to 32.  I don't need the money, so there's more at stake than that: I only want to work 32 hours per week.
And what about Sarah Huckabee Dumb Shit refusing to say the media is not the enemy of the people?  A lot of people believe she is just out and out lying, that she's just doing her job.  They are wrong.  She's an Evangelical Christian.  Because the Idiot Jerk in the White House is giving them everything they want (Sessions and his Christian Task Force) they think he is a gift from God.  They believe everything he says can be sourced to the Almighty.  If that doesn't scare the shit out of you, it should.  This is the reason our Founding Fathers decreed there be a separation of Church and State.  They do not now, nor will they ever understand the evil they do.  They are worse than a plague of locusts.  They will try and devour everything decent and good, leaving behind nothing but their empty Evangelical desolation.  Of course, they will fail, these groups always do.  You see, even though their appearance is that of a plague, they lie about their numbers the same way they lie about everything else.  They will get ugly when they see the truth.  Like a rabid rat in a cage, they will bite at anything, and in the end they will devour themselves.
Now wasn't that cheery?
Vote Blue.  Every Blue vote is a stake in their hearts.  Every Blue vote slivers away a bit of their phoniness, whittles away at the ugliness of their lies.  Every Blue Vote Counts. 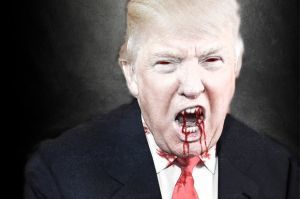