Welcome to my Friday.  That's right.  Those of you with flawed calendars might actually be thinking this is Saturday.  Nope.  When I look at my retail calendar I know this must be Friday - my weekend starts tomorrow.
Yesterday was ho-hum at work.
I saw where the Idiot Jerk warned Mueller not to go near his 'Financial Empire.'  That made me laugh.  What a fuckin' crook.  Of course that thought took me back a number of years, to the Nixon administration.  While age may be startitng to sift away some of the details, I can still fondly remember Nixon uttering those very lines.  "I am not a crook."  Dear me.  Just what would old Richard think about the Idiot Jerk in the White House? 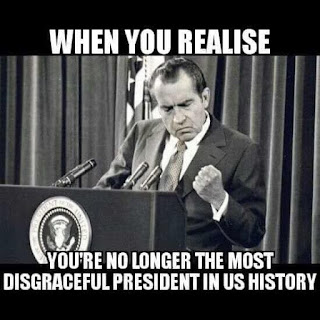 And we have to be honest here.  Nixon wasn't actually a crook.  He, himself, did not break into the Watergate building - he had others do it at his direction.  This is precisely what the Idiot Jerk has been doing for... decades.  Having others do is dirty work.  Attorneys filed law suit after law suit.  His bookkeepers have been fudging figures for years, filling out load documents and filing false tax reports.  As I said before, the Idiot Jerk is going to make Nixon look like an alter boy.  Judgment is coming for the Idiot Jerk and his spawn.
And what about that Duncan asswipe out in California.  In case you hadn't seen, he blamed everything on his wife.  Everything.  He was innocent.  Why is it gutless Republicans always point the finger at some one else?  And this Duncan?  I understand he was the 2nd sitting Senator to come out in support of the Idiot Jerk in the White House.  The first was that Bozo Republican from New York who was just indicted for Insider Trading.   These to pinheads show the corrupting influence of the Idiot Jerk in the White House.  Shit, the whole party is morally bereft.