Down on the Farm

My weekend is over.  I get to go back to work... on a Friday knowing that my next weekend will not happen until next Wednesday.  That's sucks.
I was down on the farm yesterday - my brother's farm.  He and his wife have a very large garden, they do need to spend more time weeding.  My grandparents had a large garden and my grandma weeded for a couple of hours every day.  They are a lot of work.
He has chickens and turkeys and a pot bellied pig, as well as an old dog.  Oh, and there's a 5 foot black snake living in the barn... somewhere.  I told him to let the snake alone, it will eat the rats.  There are always rats because of the grain.  That's also why cats are a valuable asset.  They just love eating rodents.  I snapped a pic of him in the barn with two of his turkeys. 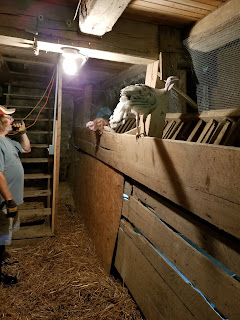 I asked him if they're going to be eaten.  He said, "nah, they're pets."  My brother has a pet farm.  They'll get eggs from the chickens, but that's about it.
They also have walnut trees. 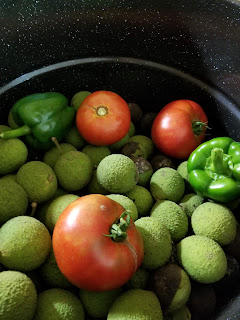 I got some tomatoes and peppers as well.  I told him they need to start making sauce.
Oh, and I saw that Melanoma's parents became citizens in a private ceremony yesterday.  Isn't it interesting how the Idiot Jerk says that's a shitty way for immigrants to become Americans... but it works for him just fine.  Another funny thing is that the Idiot Jerk's administration now wants to make becoming a citizen even more difficult.  These people are so damn two-faced it's ridiculous.