Before the parade passes by

Well, I get to go back to work today... I'm not excited.
That dental work I had done?  Where my dentist smoothed out my front teeth?  I bit into a plum last evening and the right front tooth chipped.  Now it looks like it did before it was fixed.  I will have to give him a call.
As I was looking through my news feeds this AM, I saw a musical version of "Pretty Woman" has opened on Broadway.  While reviews are not scathing, they are not too kind.  One of the criticisms which seems to be dominant is the fact that if you're a woman, there are more important things than just being 'pretty.'  I was never that impressed with the movie.  I saw it a long, long time ago and realized it for what it was:  trivialized schmaltz.
Oh, and the military parade is off.   I repeat, the military parade is off.  They are claiming the $92 million price tag makes it too expensive.  I'm suspecting the Idiot Jerk's blow buddy Vlad not being in town in November might be the more obvious reason.  Let's be honest.  The only reason they were going to have it at all was for the Idiot Jerk to show off.  The parade was to be his way of preening in front of Vlad.
I went to see my Mom yesterday.  She was sitting outside in 90 (F) heat wearing a sweatshirt.  Her nails were painted gold.  My sister had called and warned me about them the night before.  I took pic so everybody could see my Mom. 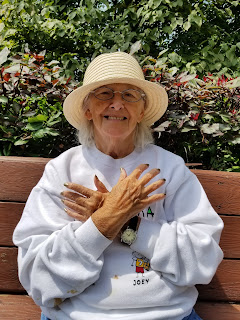 If you look closely, you'll see the time on her watch is somewhere around 6:40.  She has no concept of time.  And her nails are gold.  She will not remember my taking this picture.  I suggested we go inside to her air conditioned room and she agreed.  An hour later, as I was leaving, she was headed back outside.  They do keep an eye on her, insuring she doesn't stay out too long.