Well, it got hot yesterday.  The temp was in the low 90's (F) when I left work.  The humidity was high, but not killer high.  This is good.  Everything is beginning to dry out.  Tonight when I get home I've got a session on the elliptical, and then a session of weed wacking.  I did do a little over 8 miles on the bike last night - my little legs had a bit of the ol' ache.
It seems the Idiot Jerk is frantically waving his little, racist hands again over an interview on CNN.  What's funny about this episode is he hates CNN.  Melanoma watches it.  He doesn't.... at least so he says publicly.  Privately?  I suspect it's a whole other ballgame, he's probably glued to CNN.  Nah, that can't be right.  He's probably paying someone to sit in a small closet somewhere furtively taking short hand notes, detailing everything that news network broadcasts. Because Don Lemon was saying positive things about LeBron James, the Idiot Jerk had to go negative.  Of course, his supporters cheered.  Do any of them care that these negative Tweets are always against black sports figures?  Hell no.  Remember, the overwhelming majority of his supporters are white.  Believe me, the Black Supremacists have not jumped on board his train.
And finally, I saw where this Idiot Jerk spit out some sort of turd that China is ready to cave on the tariffs....  Only an imbecile would believe that.  Oh, wait, that pretty much describes all of his supporters, doesn't it?  I don't understand how they so easily shrug off all of his lies.  Don't they know they're going to end up with a permanent slouch?  The truth is they don't care.  They're just happy that for once in their lives some ass is telling them what they've always wanted to hear.  Truth be damned.  He tells it like it is for a group of people who have so much hate in their hearts.  They hate color.  They hate women, unless they're baby factories.  They hate accents.  They hate any religion but theirs.  They hate free thought.  They hate free press.  They hate anything and everything that doesn't feed their hate... and these haters want to control. If you don't hate the same things they hate, you are the enemy and they hate you.
How do you punish these haters?  Take the power away from them.  Put them back in the cellar.  Vote them out of existence. 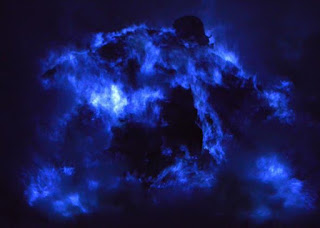 We are the Blue Storm rising.  We need to show them storms are scary things.
Posted by Dave R at 6:56 AM