Well, it's Monday and I get to go back to work after having just one day off and yesterday was, except for a few things, pretty much a waste.  Blame it on the snow.  Now snow doesn't bother me since I have no problem shoveling.  For the dogs?  Play time city!  They went out for about 10 minutes, and then they came back in and I'd dry them off, and then after about 20 minutes they'd go back out again.  This was repeated frequently through out the day.
I did watch the UCI Cyclocross World Championship live from Valkenburg, Netherlands.  Many of the people who attend these races wear funny hats and drink lots of beer, and yesterday I'm sure they drank more beer than usual since the temperature over there was 1 (C).  The winner was a gent named Wout Van Aert, from Belgium - give him a round of applause for his 3rd win! 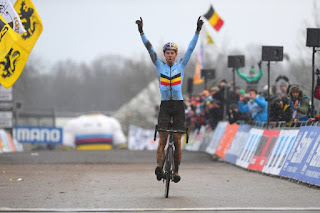 Oh, and my Dad's Eagles finally won their first Super Bowl.  My Dad was a lifelong Eagles fan.  Yesterday would have made him so proud.  They get a round of applause as well - I'm sure the city of Philly will be green for a number of days to come.  I wonder if the Idiot Jerk in the White House will invite them to visit - last year there was a bit of a problem - no one wanted to get that close to a dirty, stinky scumbag.
Last evening, while just about everybody else in the United States was watching the Eagles win, I went to the movies with my friend Patty.  What did we see?  "The Shape of Water."  What a great film.  Every accolade you hear about this movie is true.  This is a modern fairy Tale - "the story of a princess, and the monster who tries to destroy her happiness."  Sally Hawkins owns this film, but the supporting performances are simply stunning.  Octavia Spencer is remarkable as Eliza's true friend, and Richard Strickland as her artistic other best friend, the one with the bad toupee, gives a keystone performance; both are nominated for Supporting Performances.

And just a wee mention of the Idiot Jerk in the White House... and how releasing that silly memo has actually put Republicans on the defensive.  Like that wasn't to be expected.  And the spawn of the Idiot Jerk?  Their response demonstrates just how stupid they truly are, calling the imbeciles would be too kind.  This is life, and they are losers.