I was going to go to the gym this morning but it was foggy out... so I decided to throw around some free weights - dumbbells: 15 and 25 pounders.  The only way to grow muscle is to work muscle.
And for those who didn't hear it or feel it, yesterday there was a Republican Shit explosion in Pennsylvania.  The state Supreme Court issued the new district voting map for the state.  I spent some time looking at different websites and news links to see what the general consensus was:  as noted in the New York Times, most think it's very fair.  One of the words I'm seeing is 'partisan' in which all parties are fairly represented.  However, that's not how Republicans view the new map.  You see, the map they wrote favored white, Republican males, those who most supported the Idiot Jerk in the White House.  The new map eliminates that advantage, and I don't use the word 'eliminate' lightly.  Evidently shit must have shot out of every possible Republican orifice.  Lucky for me, none were standing nearby.  Below is the old map, and the new map.  Holy Republican Shit Storm. 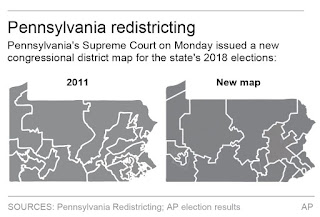 This is going to mean big changes, not only in Washington, but in Harrisburg as well since Democrats, the majority in the state, will now have fair representation.  Vote Blue.
Yesterday was also a weird day at work - President's Day, you know?  A holiday for some, but a lot of others had to work.  The store was busy in the morning and early afternoon, the flooring desk exceptionally so, but then everything died off.  As I was ready to leave for the day, I had some customers come up to the desk who'd had their windows measured for blinds.  The Specialist they were working with had gone for the day, before he'd left, but he'd spent 3 hours designing 2 sets of blinds for them to review.  We are running a special, 20% off select blinds - the styles of blinds they'd chosen don't get the discount.  Unfortunately, we don't know which styles are on special. These customers wanted faux wood, and faux wood rarely gets the discount.  Of course, they wanted me to sit there and go through different vendors to see if any of them were offering the special of faux wood blinds.  Sorry, that wasn't going to happen.  This customer wants cheap blinds and a 20% discount to boot.  Custom made blinds are never cheap.  If they want cheap, they need to buy the grab and go.
Posted by Dave R at 8:37 AM