Well, here it is Friday, the 2nd of February.  They're calling for snow shower here.  And, of course, I get to go to work.
Today is also the day that Devin Nunes, a Hard Right is planning on releasing a 4 page memo that he wrote after cherry picking bits and pieces of data, and then shading that data with a healthy helping of deceit.  Sadly, this is rather amusing since the only people whom this will impress are supporters of the Idiot Jerk in the White House.  Centrist America knows how much seething anger is bubbling up just below the surface of every hard core Republican.  Supposedly this memo will be the grounds upon which the Idiot Jerk will base his decision to fire Mueller, of course everybody knows, except these crazy conservatives, that to do so would be akin to a vampire staking himself in the heart... not that the Idiot Jerk has a heart.
And, of course, there are the sanctions which the Administration is refusing to sanctify, because... well... the Idiot Jerk loves mother Russia.  Once you start looking, you'll rather easily discover how many people are now saying that he's sold out the US.  So, is the Idiot Jerk a Traitor.  Not in his mind.  He's sees himself as a businessman.  And during the campaign, when the Russkies came knocking, he answered because that's what a "smart" businessman would do.  Crooked as hell, he is.  Which is why he wants the investigation shut down.  Those hard core assholes on the Right want it shut down because for them it will mean a loss of power.  For the Idiot Jerk?  The longer this investigation continues, the more and more things begin to unravel, including his 'empire.'
What we're seeing right now are acts of desperation, and they'll throw everything, including the kitchen sink to keep it from unraveling anymore.
They may slow things down a bit, but they don't have a chance in hell of stopping it.
Oh, and in case you're wondering, Phil saw his shadow this AM which means we'll have 6 more weeks of enduring the Idiot Jerk in the White House... sorry that's wrong, we'll most likely end up with another 12 months of his bullshit. 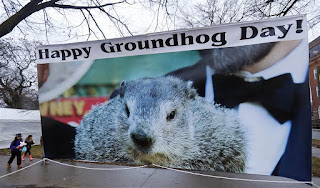 For those who didn't know, groundhogs are members of the squirrel family... (I didn't know that).  What I do know is that ever since I got the dogs, the squirrels have stopped burying their nuts in my back yard.  I also know I have groundhogs on the hill behind my house.  The dogs watch them through the fence, all the time thinking 'toy, toy, toy, toy.'
Posted by Dave R at 8:19 AM