Some are blessed... some ain't

So I see that the Idiot Jerk in the White House's breeder spawn (I vant it) Ivanka is as colossally stupid as her old man.  I wonder if the NRA promised her a copyright if she echoed their belief that teachers should be armed... of if perhaps they just offered to loan the Kushner family some greenbacks.  The only people in this country who don't want any form of gun control are those Crazy Conservatives and their Republican representatives.  These representatives, when it comes to a choice between your child's life and being funded by the NRA in order to get re-elected, are always going to take the money.  For them, staying in power is much more important then living children.  Even more amazing is that many of these Crazy Conservatives claim to be Social Conservatives, supposedly Christians through and through.  These fools don't understand that they've made the NRA's phony 2nd amendment claim much more important than the sanctity of human life.  There's going to be hot time in hell when they die.
And Congress goes back in session today... don't look for any noticeable change in the Republican gun control tactics.  Once your soul is sold... there's no getting back.
Speaking of souls, now I know many, many Social Conservatives have already signed that pact between themselves and the Idiot Jerk in the White House.  They love him.  They praise him.  Does anybody know if they actually bow their heads when he walks into the room?
My cycling shorts arrived yesterday.  Olive green.  They look like regular shorts. 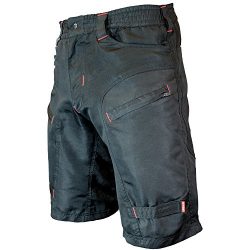 The spandex lining (with the padding) is separate.  Now, I have to tell you, I'm not a spandex kind of guy... not in the least.  Back when I was in college, not only did I direct a couple of shows, I also did set design and chorus work.  One year they did "Once Upon a Mattress," a show I'm not too fond of, and, unfortunately ended up being cast in a bit part:  Sir Studley.  Go ahead and laugh.  Anyway, I had to wear tights... and hated them.  And comments... boy, did I get comments.  Things like "oh, I see you got the part because of your talent," to "don't you get tired of being typecast."  I'd never realized that such a blessing could be such an embarrassment.
Posted by Dave R at 8:32 AM