Well, here it is Friday.  I don't work today, but you might... that's life.  The alarm was set for 0530, it went off, I turned it off, and laid back down for a couple of seconds and woke up an hour and half later.  That is also life.  And I just finished a small bag of caramel corn left over from our Holiday Party, sealed of course, not stale, and I thought it was pretty tasty.
My plans for today are not that complicate:  go to the supermarket, put the final coat of pain on the dining room ceiling, and go for a bike ride (hopefully 10 - 15 miles).
I find it rather amusing that there are people out there who believe that the Idiot Jerk's idea to arm teachers is pretty good.  They have no idea how close that would get us to living in a Police State, all because there are some people who just can't give up their guns.  Let's be honest here.  The idea of using an AR-15 to go hunting is simply ludicrous.  Putting 15 bullets into a White Tail Deer is not hunting.  Nope, that is killing for killing's sake.  Going to a shooting range, pointing an AR-15 at a target and pulling the trigger as fast as you can?  That's not target practice.  You're not aiming.  Just because you get your jollies from pointing and shooting doesn't make it a sport.
The 2nd Amendment does not guarantee you ownership of any or every weapon you want.  Of course the NRA wants you to be able to own any fucking gun that you want, not matter how crazy you are.  Mental instability should not be a barrier, they shriek.  And for a small group of people, around 5 million members, they have a lot of political power, thanks to the bullet makers who pump their coffers full of dollars.  You see, it's the ammunition makers who make a financial killing; bullets are expensive.  And no Republican is going to turn down those buckos.
Just as amusing... well, no, a hell of a lot funnier was the reaction of most people to the Idiot Jerk's suggestion.  The one comment I thought to be strikingly pertinent was the one that called it "colossally stupid."  Isn't that a nice word?  Colossally?  Bigger than immense.  And stupid?  Well we all know that the Idiot Jerk is the king of stupid.
And another funny thing is that there's a special election coming up in Pennsylvania and the Republicans are shitting bricks!  They're guy is in such bad trouble they're planning on bringing in the big guns. 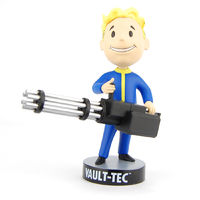 No, no, no, they're not sending in the Big Guns Bobble head from Fallout IV.  If they were wise enough to do that, I'd have to tell you to stand back.  Nope.  Pencil Head Pence will be showing up to try and erase some of the growing animosity among the voters in the Western part of the state.  He's also supposed to be preparing the ground work by a visit from the Idiot Jerk.  You know, that guy loves playing to small crowds.  They don't seem to understand that his showing up might just be... colossally stupid.