The ceiling, the NRA, and the padding

Saturday morning - I'm off.  I'll have to work Sunday and Monday but then I'm going to have off for another 2 days.  Right now I'm working 32 hours a week and that's fine with me.
As for yesterday, I got everything accomplished that I planned on - this doesn't always happen.  Usually my 'to do' list ignores time constraints and not everything gets finished.  Yesterday?  Everything ran slick.
The dining room ceiling is painted.  Counting a primer coat to help cover the different shades for green, I used to more coats of Behr Premium Plus (flat) - the color is Garden Rose White (sort of a very, very pale peachy yellow). 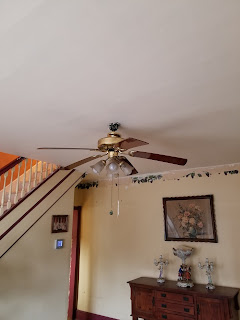 You can see where I started ripping off some of the boarder - can't wait until that's gone.  And the ceiling fan is going to be replaced.
And the Idiot Jerk in the White House spoke at CPAC yesterday - after Wayne LaPierre's ranting the day before, these crazy conservatives seem more bent then ever on isolating themselves away from Centrist America.  Of course, our phony president lied about all of his accomplishments because this fool is a serial liar.  What's even funnier is that those morons applauded his lies.  These people are so out of touch I find it amazing that even one of them can wipe his ass without getting it all over his face.
Florida wanting to raise the legal age to 21 for gun purchasers is a small step in the right direction.  You do have to remember that there are a lot of seniors living in Florida who have been brainwashed by the NRA into believing any from of gun control is an attack on their 2nd Amendments rights.  Of course, that's bull shit.
An interesting thing about that NRA - by their estimates, there are only 5 million members.  In a country with a population of almost 330 million where do they get those very major dollars they give as campaign contributions to Republicans?  We're not talking about small change here.  If each one of their members gave $100 each they'd have $500 million in their coffers - until you started deducting wages and business expenses.  However, most of their funding doesn't come from members, rather it's the gun manufacturers and those who sell accessories are those who provide the bulk of the monies.
Anyway, I ordered a new pair of bicycle shorts - they should be arriving tomorrow.  Bicycle shorts, you ask?  Yepper.  Bicycle seats are not the most comfortable and if you're planning on spending more than a half an hour riding you're going to need a little extra padding.  This comes in the form of 3D chamois (not the real chamois, the fake stuff) which looks a lot like a splayed Kotex (if you know what a Kotex is).  If you don't, here's a picture. 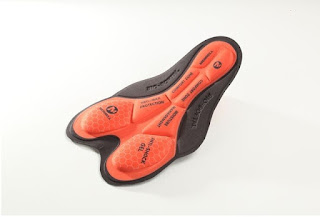