So, here it is Monday, July 3, the day before the 4th, and as usual I am working; tomorrow as well.  This is how it goes in retail.  I figure I have 3 - 4 years before I can go from full-time to part-time and while I haven't set the date yet, I am anticipating.
I was surprised by the number of people at Planet Fitness this AM - but then it is a day before a holiday, and people do want to look all toned and pumped and toned for their parties.  Me?  I just did my regular routine, upped the weight on my squats, so I might be sore later.  That's fine.  I remember my Mom telling me that if you get sore after working out you did something wrong - not so.  Life is filled with pain, physical and emotional, and sometimes there are long stretches when we are pain free, but in the end there is pain.  It's how we deal with it that's important.
There's also humor as evidenced by some video the Idiot in the White House posted - something from his Wrestlemania days... now isn't that embarrassing as hell?  A minority group of aging, white people voted his lunkhead into office without understanding he was going to be the laughing stock of the world.  I haven't watched it because... well, to be perfectly honest, my IQ is over 70.  However, I must say that understand fully why the Idiot posted it.  You see, if he were Putin, and this was Russia, and the American people were Russkies, well, we would be like "wham, bam, thank you man!  Ain't that Idiot something special."  You see, Vlad posts shit like that, not on Wrestlemania, but score fake goals in hockey, and doing Karate, and wrestling bears... wait, maybe Vlad was on Wrestlemania.  I mean he did wrestle a bear didn't he?  Bare chested?  Anyway, the Russian people like to see their leader proving his manhood, and, well, in a perverted sort of way, that's just what the Idiot did.  He proved his manhood, how powerful he truly was, by beating up a faux CNN because... well, because he's the Idiot in the White House. 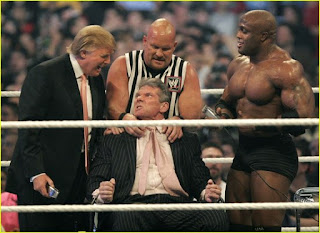 And, as well all know, he's just as phony as Wrestlemania.  Dear Lord, how low it is that America has stooped.
Posted by Dave R at 9:00 AM