From the sweat of my brow

This is the cap I wear when I do my cardio, supposedly to keep the sweat from running down my face and into my eyes, sometimes I think, however, it's to keep thoughts from exploding out of my brain and into the world. 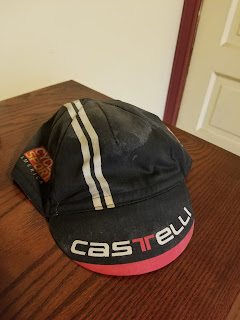 Like pondering about Chester Bennington from Linkin' Park's suicide.  The idea of choosing nothing over something is totally incomprehensible to me.  And, of course, there was the usual talk on the Internet about his struggling with drugs and alcohol...  just like a millions of other people.  And then the bits came out about his having a terrible childhood, and his being molested by and older friend when he was a boy... that last one, that's the one which tweaked my irritation.  Not that it didn't happen, but that a man who made millions of dollars didn't seek treatment for his "psychological scarring."  That evidently didn't happen, he did tell people about it however, stating that the experience was so "traumatic" he often thought of suicide.  So, it's a good thing I had my cap on this morning because I'm sure there are a lot of people out there who would not like where my thoughts were taking me.
And then there were my thoughts about the Scumbag Idiot in the White House and his interview with the NYT.   Isn't interesting how he derides it constantly for being filled with fake news and uses it to spit out his venom?  Firing Mueller?   Shitting on Sessions?  Holy Crap!  I was ready to jump off the elliptical and grab my pompoms!  Kick line anybody?  Holy Shit, they might investigate his finances!   Nixon proclaimed "I am not a crook," however the Scumbag Idiot in the White House most certainly is and has always been one.  Every group that supported him, from the NRA to Family First, will suffer the consequences of his collapse, as will every middle aged white person who took their hatred of everything Democratic and Centrist into the ballot box that night in November.  His Karma is so terribly bad!  Everything around him will splinter and shatter.  This is how life happens.
Posted by Dave R at 9:20 AM