The gent with the handlebar mustache, known now as Mr. Mustache, wasn't at Planet Fitness this morning, however Mr. Beard was... in the stretch room... doing planks.  Now, I hate planks, but I may have to start doing them... you know? Anyone for a little medicine ball?
Fat and Skinny were there, too, not in the stretch room but rather hogging up one piece of equipment like they always do.  Let's call them F & S.  F is an older, fat, white guy and S is a skinny, much younger black guy, and they tend to gravitate to one piece of equipment where they do a lot of sets with out much weight, like maybe 20 sets, at 20 lbs, and I don't think that really does anything besides take up space.
And how about that Idiot in the White House?  Joint cyber-security with the Russkies?  Why not just let them run our elections for us?  I mean, isn't that pretty much the same sort of bullshit?  I mean, the Idiot is pretty much a delusional Fanboy when it comes to his hero, his master, Vlad.  He's not kept it a secret that he's idolized that man because Putin is the ultimate CEO - a dictator, who, for the most part, runs Russia with an Iron Fist wearing a lambskin glove.  In fact, I wouldn't be surprised if during their "extended meeting" the Idiot didn't ask for an autographed photo, in 3D no less.
If only Conservatives watched Dr. Who, then they'd know!  Putin is The Master, though not as cute, 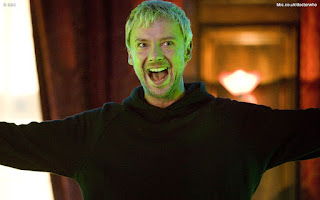 And the Idiot is... well, let's just say K-9 had more intelligence in his left wheel nut then the Idiot has in his entirely empty head.